NARCONTROL
Rapidly detect drugs on surfaces and in dust

detects the presence of 7 major drugs

The NARCONTROL drugs test is a chromatographic immunoassay for the rapid detection of 7 of the major drugs targeted at young people and teenagers.

The NARCONTROL drugs test reveals the presence or otherwise of psychotropic substances and their main metabolites on the surfaces of frequently used personal effects (such as keys, toothbrush, glasses or watch.)

The NARCONTROL drugs test was developed to provide clarification on drug use without the need for laboratory analysis. It enables testing to be done confidentially in the privacy of the home without requiring external evaluation.

The testing device is made up of a plastic casing containing 7 testing strips, the tips of which are protected by a removable cap that guards against damage or contamination. Each strip is clearly marked in a reaction zone window to identify which drug it is being testing and to show the results individually. 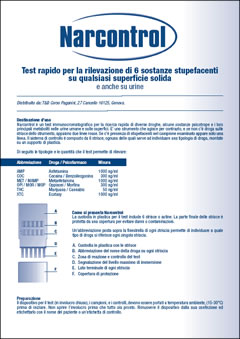 Back To Top
We do not track users or collect personal data. Anonymous data may be used for statistical purposes. Privacy | OK.